'A Loss' was my cry to the world about Putin's war in Ukraine. I wanted to shake the international community out of inaction. To remind everyone that Ukraine had lost thousands of lives in this war that started in 2014. To lend my voice to those grieving families that did not have the chance to be heard in the West. The West, however, has woken up to Putin’s aggression only when Russian missiles fell on residential areas of Ukraine, killing civilians.

The courage of the Ukrainian people is immense. We stand united in Ukraine and all over the world because we know what we are fighting for. By defending Ukraine from Putin’s aggression, Ukrainians, first and foremost, are defending their freedom and dignity. It’s imperative that all of us stand with Ukraine in every way we can because by supporting Ukraine we stand for our own freedom and dignity.

The Story of a Dead Soldier Told by His Sister

With a foreword by Andrei Kurkov

'Grappling. I admire a book that invites me to grapple with knotty questions. Olesya Khromeychuk has written such a book–beautifully. Feminism and drones. Funerals and theater. Shrapnel and combat boots–size 8. "A Loss" explores the lures of militarism at a granular level.'
--Professor Cynthia Enloe, author of Nimo's War, Emma's War: Making Feminist Sense of the Iraq War.

'Moving, intelligent, and brilliantly written, this is a sister’s reckoning with a lost brother, an émigré’s with the country of her childhood, and a scholar’s with her own suddenly acutely personal subject matter. A wonderful combination of emotional and intellectual honesty; very sad and direct but also rigorous and nuanced. It even manages to be funny.'
--Anna Reid, author of Borderland: A Journey Through the History of Ukraine.

'There has always been too much silence around the armed conflict in eastern Ukraine -- Europe's forgotten war. Olesya Khromeychuk refuses to bend to this silence. In vivid, intimate prose and with unflinching honesty, she introduces us to the brother she lost in the war and found in her grief. Poignant, wise, and unforgettable.'
--Dr Rory Finnin, Associate Professor in Ukrainian Studies at the University of Cambridge.

“A Loss: The Story of a Dead Soldier Told by His Sister” is volume 15 in the “Ukrainian Voices” book series published by ibidem Press. The “Ukrainian Voices” book series includes English- and German-language monographs, edited volumes, document collections and anthologies of articles authored and composed by Ukrainian politicians, intellectuals, activists, officials, researchers, entrepreneurs, artists, and diplomats. The series aims to introduce Western and broader audiences to Ukrainian explorations and interpretations of historic and current domestic as well as international affairs. The purpose of these books is to familiarise non-Ukrainian readers with how some prominent Ukrainians approach, research and assess their country’s development and position in the world. The series was founded in 2019, and the volumes are collected by Andreas Umland.

Rostyslav Averchuk, 'Introducing Olesya Khromeychuk’s book A Loss. The Story of A Dead Soldier Told by His Sister', VoxUkraine, 10 Dec 2021.

"Women at war, from Kabul to Kyiv", Marking this year's International Women's Day, Christiane Amanpour speaks with Afghan scholar and activist, Dr. Orzala Nemat, and Director of the Ukrainian Institute London, Dr. Olesya Khromeychuk, on how women in their countries bear the brunt of war. Source: CNN, 9 March 2022 WATCH 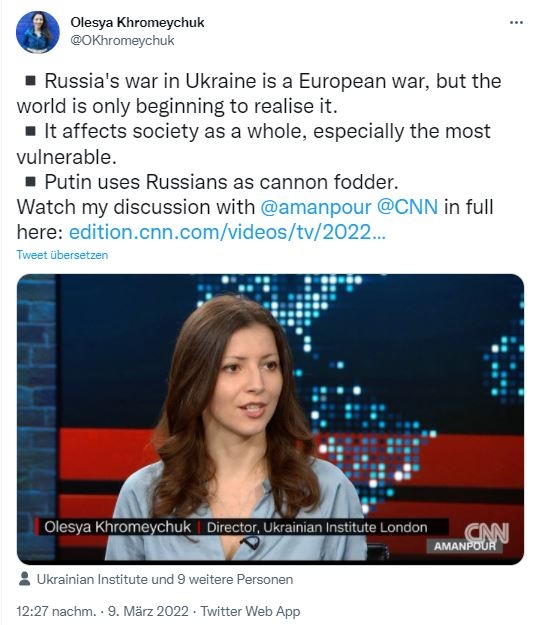 New Books Network podcast: Steven Seegel, Professor of Slavic and Eurasian Studies at The University of Texas at Austin, in conversation with Olesya Khromeychuk. LISTEN

On Putin's war against Ukraine
(comments, interviews and articles)

Julian Evans, 'Why Putin is obsessed with Ukraine and Russia being "one people"', The Telegraph, 6 March 2022.

'"He has decided to destroy the whole world"': Six global voices on Putin's invasion of Ukraine', CNN Opinion, 2 March 2022.

'My Ukrainian brother was killed on the frontline - he was right when he said this is a European war', Metro, 25 February 2022.

A Loss has been chosen by the Temerty Contemporary Ukraine Program at Ukrainian Research Institute, Harvard University for their book club in March 2022.
AUGB London: Thu 10 Feb | 6:30 pm (in person), organised by British-Ukrainian Aid. (in Ukrainian)
WATCH 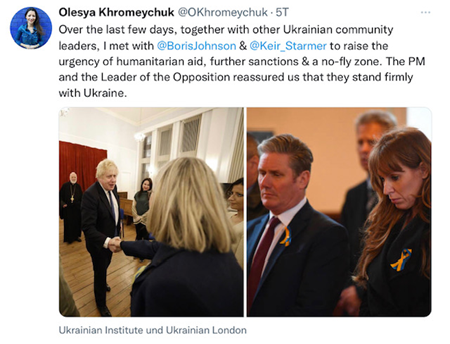 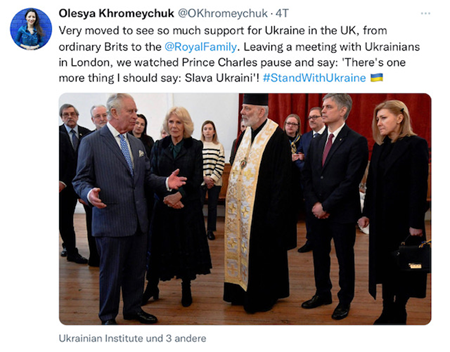