Nailed to the rolls of honour, crucified: Irish Literary Responses to the Great War

In “Nailed to the rolls of honour, crucified: Irish Literary Responses to the Great War – The War Writings of Patrick MacGill, James Hanley, and Liam O’Flaherty” Robert Starr examines Irish perspectives on the First World War based on the works of three Roman Catholic Irishmen. What influences shaped Irish soldiers from the working class in those days? With what motives did they go into battle? And how did the soldier’s faith affect their attitude to the war? Starr tries to answer these questions. He looks at them in a European context and focuses on the fact that the working class saw military service as work and not as a duty or vocation. 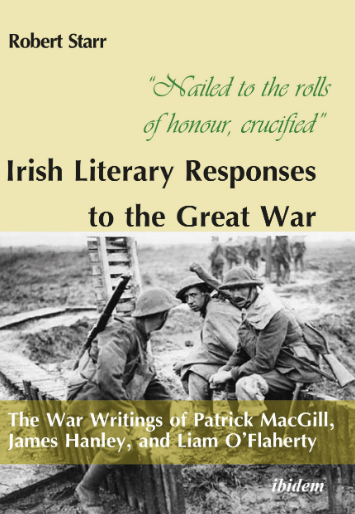 This book explores the war writings of Patrick MacGill, James Hanley, and Liam O’Flaherty, working class, Roman Catholic Irishmen, all of whom fought in the First World War as privates and who, collectively, it is argued, constitute a distinct trio of war writers. Through discussions focusing upon class, camaraderie, violence, religion, trauma, and the body, this book considers these Irish soldiers within a cultural, social, and historical context. Central to this examination is the idea that the motives for enlistment and the experience of army labor and even combat was such that military service was perceived as work rather than a duty or vocation undertaken in support of any prevailing doctrines of patriotism or sacrifice. The men’s Catholicism also shaped their aesthetic and philosophical responses to the war, even while the war conversely troubled their faith or confirmed their religious scepticism. The war writing of these men is located within both an Irish and a pan-European literary working class tradition, thereby permitting the texts to be viewed within a wider context than literature of the First World War, and from a perspective that goes beyond Ireland and Britain. These characteristics shape a perspective on the conflict very different from that of the canonical officer-writers, men such as Siegfried Sassoon, Robert Graves, or Edmund Blunden, whose work is considered alongside those of the three Irish soldier-writers.

Robert Starr began studying English Literature later in life having previously worked in such diverse occupations as law enforcement in England and music while living on the east coast of America. Attending the Universities of Central England, Cambridge, and Warwick, where he completed his PhD, Starr developed an interest in the men who form the cornerstone to this text. Having an Irish heritage, his desire was to bring to the fore the experiences of Catholic soldiers from Ireland who fought in the British army, men who historically have received little attention.