Olexander Scherba, Ukraine’s Ambassador to Austria, looks back on 26 years of experience in the Ukrainian foreign service. In "Ukraine vs. Darkness" he presents his view of international affairs from a Ukrainian perspective with captivating essays.

“If you really want to make sense of what is happening in Ukraine today, and how Europe views what is going on in Ukraine, read this book.”

Ivan Krastev, author of "Democracy Disrupted" and "After Europe" 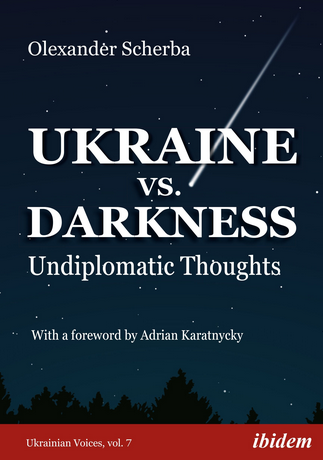 “A government insider’s gripping and incisive look at Ukraine and its war with Russia. Essential for anyone who wants to understand this poorly known country, whose fate is pivotal for the future of Europe and the global balance of power.”

Peter Pomerantsev, author of "Nothing Is True and Everything Is Possible" and "This Is Not Propaganda"

“From one of Ukraine’s leading diplomats, these unvarnished “undiplomatic thoughts” are deeply personal reflections on a country on the front lines of liberal democracy’s civilizational battle against kleptocratic authoritarianism. Scherba expertly deconstructs myths about Ukraine, as well as Russian motives in his country, eloquently voicing its people’s aspirations to determine their own future by escaping the Kremlin’s shadow and becoming a full-fledged European country.”

Gregory Feifer, author of "Russians" and "The Great Gamble"

“Ambassador Olexander Scherba’s book is an excellent and instructive example of how patriotism can draw upon the foundations of Christian humanism while avoiding the trap of nationalism.”

“In his book, Olexander Scherba avoids the usual stereotypes of a diplomat as a frozen bureaucrat and of a post-Soviet Ukrainian having difficulty speaking to the world. He himself is proof of Ukraine’s fight against darkness.”

This book draws on the author’s experience from 26 years of Ukrainian diplomatic service in, among others, Bonn, Berlin, Washington, and Vienna, and his work as a speechwriter to most Ukrainian foreign ministers for the last two decades. Scherba’s captivating essays reflect his views of international affairs from a Ukrainian perspective. His deliberations are presented in uncomplicated, plain language. The articles assembled here have repeatedly caused discussion in Ukraine and abroad. By his opponents, Scherba is often described as being surprisingly undiplomatic and even provocative. For instance, his article “Why nationalism can’t be the national idea of a European Ukraine”, published on a Ukrainian nationalist website, stirred considerable controversy in Ukraine. Aside from explaining Kyiv’s take on some key issues of international relations, these essays provide insights into Ukrainian political thinking since the start of Russia’s military aggression in 2014, and into the painful political intramural fights in Ukrainian society ever since.

Dr. Olexander Scherba studied linguistics and politics at the National Taras Shevchenko University of Kyiv. Since 2014, he has been Ukraine’s Ambassador to Austria. Previously, Scherba worked as Ambassador-at-Large at Ukraine’s Ministry of Foreign Affairs, advisor to Arseniy Yatseniuk as a candidate in the 2010 presidential elections, counselor at Ukraine’s Embassy in Washington, DC, deputy chief of staff for Ukraine’s Foreign Minister Anatoliy Zlenko, and junior diplomat at Ukraine’s Embassy in Berlin. Scherba is an active publicist, regular contributor to the Kyiv weekly Dzerkalo tyzhnia (“Mirror of the Week”), and author of, among others, the Ukrainian-language books Against Darkness (2020), Modern Diplomatic Service (2002), New Europe (2018), and The Transformation of the Ukrainian National Idea (2019).